PRACE-LAB: an agreement was signed to build a national infrastructure for parallel computing 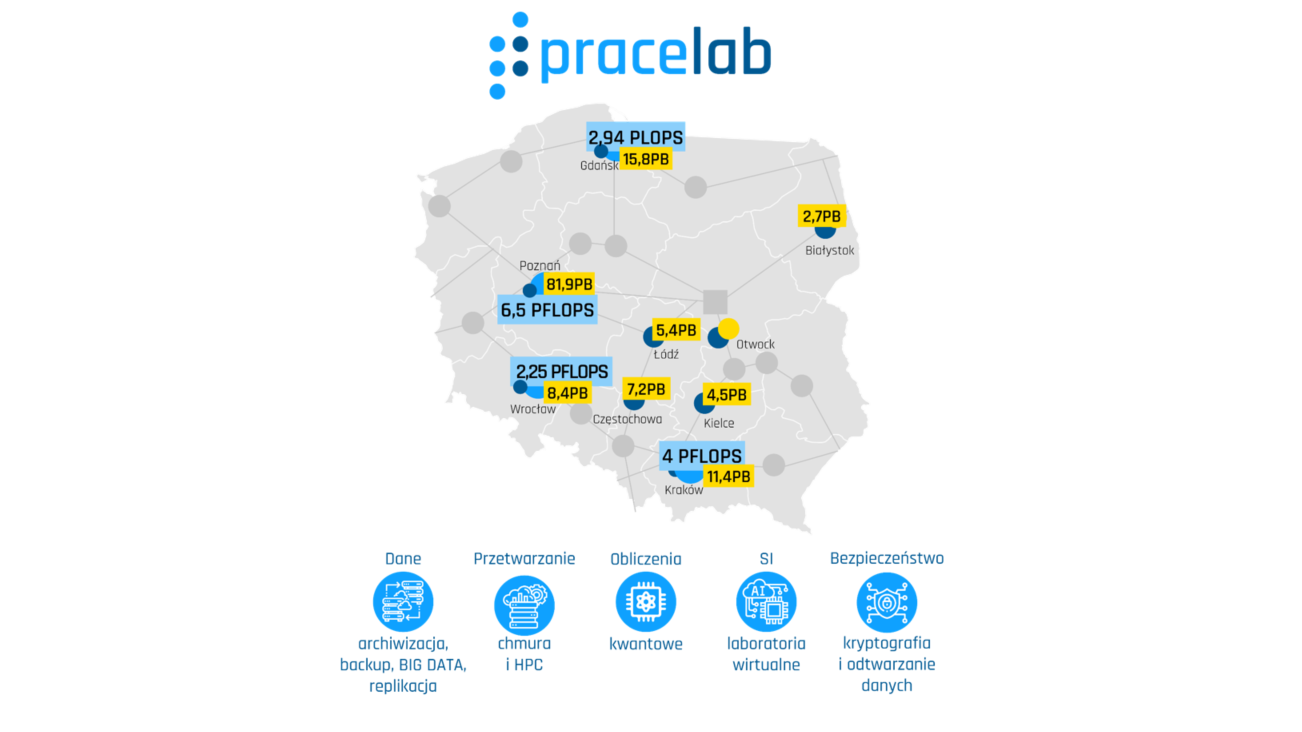 As part of the PRACE-LAB project – Collaboration in the field of advanced computatons in Europe which is present on the Polish Map of Research Infrastructure, an agreement was signed to build a national infrastructure for parallel computing (HPC – High Performance Computing) and data infrastructure. The created infrastructure will provide its services in the national public cloud and private data and processing cloud. The contractor for such a complex project – the construction of the largest HPC/CLOUD cluster in Poland together with a data storage system is Integrale IT Sp. z o.o. PSNC, as a national academic computing center and operator of the metropolitan area networks, is one of the project members.

The data processing infrastructure created as part of the project will be unique in Poland and will be characterized by computing power at the level of 16 PFLOPS, of which 1+ PFLOPS will be implemented by GPU accelerators. At the same time, the project will create a data infrastructure with a total capacity of nearly 200PB and efficiency of 477GB/s, located in the largest Polish academic centers, in the cities participating in the project: Gdańsk, Białystok, Kraków, Poznań, Wrocław, Częstochowa, Kielce and Lodz.

The system constructed will be connected to the national academic PIONIER network and to GÉANT European broadband network. The integration of this infrastructure with the European systems EuroHPC, PRACE and services on the data infrastructure is planned at a later stage.

Both state-of-the-art systems will be made available to the scientific community and to the industry, enabling users to analyze and forecast on the basis of Big Data processing and to work in ready-made environments as part of virtual laboratories. Users will also have access to a number of specialized services with a high level of reliability supported by specialized services for machine learning creating support for applications using AI (Artificial Intelligence) or cloud storage, extending the traditional model of HPC systems. In addition, the system will provide users with a quantum computing emulator, which will take the processing of large volumes of data to a new level. The launch of this service is planned for the end of 2020.

The overriding goal of the system is to increase the competitiveness of the scientific community and enterprises in Poland, with particular emphasis on SMEs operating on international markets. It is planned to improve the position of the Polish ICT sector by supporting and strengthening the development of innovative solutions.

As part of the project, Poznań Supercomputing and Networking Center will provide its users with nearly 6.5 PFLOPS of computing power on general purpose processors and specialized GPUs. The data storage will be expanded by over 80 PB of systems capacity to store, share and process the industrial and research projects data. This system will be 5 times larger than the main computing system of PSNC – Orzeł/Eagle, which will allow it to be in the top 40 of this year’s TOP500 list, being at the forefront of the largest computing systems in the world.

Project no. POIR.04.02.00-00-B001/18 pt. PRACE – ollaboration in the field of advanced computatons in Europe, co-financed by the European Regional Development Fund, was launched under Measure 4.2 of the Intelligent Development Operational Program 2014-2020. The project was placed on the Polish Map of Research Infrastructures already in its first edition in 2011.