EnrichEuropeana+: Humans and computers work together to uncover treasures of the past 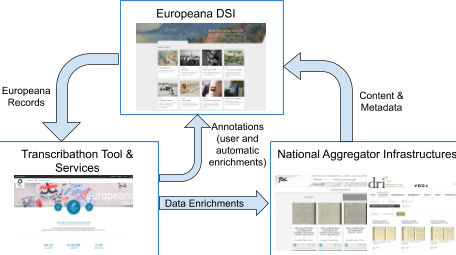 The EnrichEuropeana+ project, which started in early April this year, is an initiative to combine citizen science and artificial intelligence to discover manuscripts from the 19th century and make them available to researchers, students or amateur historians. Apart from PSNC, this initiative was joined by partner institutions from Poland, the Netherlands, Germany, Ireland, Austria and, Croatia.

There is a wealth of information about 19th-century history, which remains mostly dormant in archives. Most of the original sources are only available in the form of manuscripts, making it impossible to access on a wider scale. In order to solve this problem, the project will digitize important and interesting documents, and the use of artificial intelligence, combined with the contribution of the community acting as “Scientists-Citizens”, will transcribe these handwritten documents.

The project will use the Europeana platform, which supports the cultural heritage sector in its digital transformation by providing one common portal for content from cultural heritage institutions across Europe. EnrichEuropeana+ is based on previous EU-funded projects that have developed the Europeana platform, the Transcribathon platform for crowdsourcing transcriptions in Europeana, and the Transkribus automated transcription tool. The project will apply natural language processing and big data analytics technologies to the analysis of transcriptions and their translations, providing support for semantic enrichment of metadata, clustering, and classification. What would have taken days before, can now be read in minutes, saving scientists valuable time and opening up our story.

PSNC, which also participated in the first edition of the project, will continue to develop the document delivery software for the Transcribathon platform. The work also includes planned extensions in other systems centered around our national cultural heritage metadata aggregator, the Digital Libraries Federation. This will allow for the dissemination of transcripted manuscripts created in cooperation with artificial intelligence and participants in crowdsourcing campaigns conducted on the Transcribathon platform.

Read more information about the project.