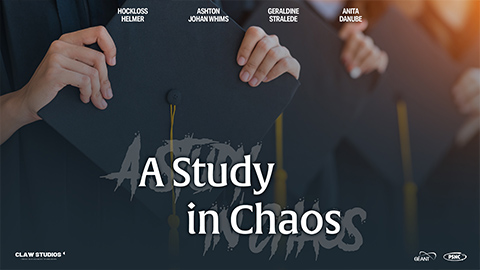 For the third year in a row, PSNC was involved in the organisation of the CLAW workshop on crisis management for the GÉANT project community. As last year, the situation related to the pandemic, forced the organisers to create a completely new form of conducting the training, entirely online. One hundred people from all over the world took part in this year’s edition; in addition to European institutions, we also hosted representatives from Canada, Ghana and Australia.
In 2019, the training took place in the spaces of the CBPIO research center in Poznan; in the following years, the pandemic did not allow for a live meeting, but did not prevent the development and delivery of interactive online classes. Guilder Kingdom, i.e. a fictional country in Europe, with a fictional history, flag and coat of arms, and even an anthem and language were created for the purposes of the workshop. What is more, a map of the NREN (GuilREN) network was created at PSNC, in which imaginary, but probable stories of crises related to digitisation at the state level take place.

Participants of the virtual meeting go to Guilder, playing the role of academic network engineers. Each time, PSNC, using its multimedia creation facilities, develops an interactive background for the whole story, adopting the convention of TV news, interactive film in a form of comic-book slides, or radio plays with background music, sound effects and a voiceover in the background. All the choices are accompanied by the atmosphere of cooperation of various responsibilities and the pressure of time and entities expecting appropriate solutions – ministries, university authorities, media. During the workshop the participants have to “stop” several times to discuss in subgroups the best solution. Finally everyone votes for one of the four alternatives, to see the effect of their choices together. The individual stories are told in such a way that the participants manage to continue the stories started in previous years and announce the next edition.

This year’s story moves to the small town of Oeucumene in the west of the country, where the Technical University is facing a crisis involving simultaneous technical problems with its network equipment, a police investigation into a hacker attack on public transport (this was the subject of last year’s event) and possible fraud charges against a group of several university professors. In a word: hands full for many people involved – CLAW participants.

A special remote tool was prepared for the training, which served as the information center for the entire workshop. Plans, sketches and information which could be used to create solution scenarios under time pressure appeared on the desktop of the participants’ web application at the right moment. In the background, one could hear the sounds of intensive office work, which was interrupted by… telephones from people interested in the crisis: Mrs Rector of the university, her assistants and the country’s leading media. The tool, controlled by the moderator-leader of the group, also made it possible to select 13 people from the address book who could provide additional information or who requested additional information from the anti-crisis group. Pre-recorded statements which sound like a telephone conversation were played directly to the player in the participant’s browser, giving the impression of a real conversation. The 5 rounds, prologue and epilogue of the workshop took the form of a dialogue between a famous detective and his assistant, along the lines of the classic detective stories about Sherlock Holmes, in the form of the radio play “A Study in Chaos”.

Presentations, training in stress and information management in crisis conditions and a two-hour interactive workshop in 10 groups simultaneously proved once again that a crisis resolution event can take place in unique crisis-like circumstances, giving a completely new, creative form to remote cooperation. At the very end, we wrapped up the voices with a film epilogue, in which all the characters appeared in the photos… generated with the use of artificial intelligence, of course!