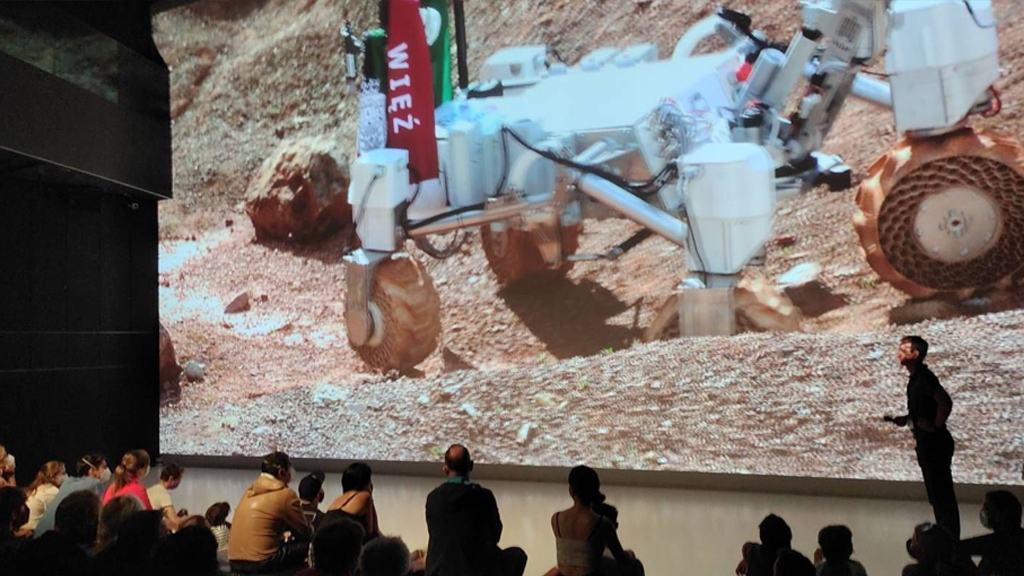 Do robots and expeditions to Mars interest artists? Of course! Futuristic visions of the world have long inspired creators. Poznań Supercomputing and Networking Center and Spin Digital “connected” Ars Electronica Festival and European Rover Challenge, enabling synergy of space researchers and artists. All thanks to new technologies and 8K streaming.

One of the world’s most important media art events was born in Linz (Austria). The Ars Electronica Festival from year to year became more extensive and multifaceted. This project started in 1979 and was designed to take the Digital Revolution’s emergence as an occasion to scrutinize potential futures and to focus these inquiries on the nexus of art, technology and society. There were symposia, exhibitions, performances, concerts and interventions spanning a broad arc from speculative futuristic scenarios to analytical considerations, from provocative actionism to philosophical debate. Each year, the Festival has been dedicated to a new theme and the organizers are also constantly on the lookout for interesting new venues—indeed, the consistent effort to break out of the narrow confines of conventional conference rooms and artistic spaces, and to stage cultural and scientific encounters in the public sphere has become something of an Ars Electronica trademark.

In September 2021, the largest space event in Europe – the European Rover Challenge – took place at the Kielce University of Technology. Poznań Supercomputing and Networking Center has dealt with the television implementation of the event for 13 cameras, in 4 locations and 3 studios. PIONIER.TV production car took part in the event and cameras followed a total of 7 photo sets showing the robot competition.

In addition, PSNC together with partners: the German company Spin Digital and the Austrian Ars Electronica literally digitally – via live TV broadcast in 8K – connected both conferences, giving scientists and artists the opportunity to exchange experiences related to robotics.

The European Rover Challenge is a prestigious space event combining an international competition of mobile robots with shows in the area of science and technology. The organizers bring space to the general public and make them aware of the growing role of modern technologies in our lives, guided by the slogan “we inspire a new generation”. It is also a meeting place for representatives of the European world of science and business interested in the use of space and robotic technologies.

The highlight is the competition of nearly 40 teams from around the world, which use rovers designed by them to perform tasks faced by robots in real Martian missions. The competition was held on a special Martian track – Mars Yard. In addition, a 2-meter active Martian volcano was built on the site, which is a reconstruction of the geological history of Martian soil in the Elysium Planitia area.

Thanks to 8K connection and streaming, which was provided by PSNC in cooperation with Spin Digital, participants of the Ars Electronica Festival could watch the struggles of Mars rovers.
– This year PSNC provided audiovisual and television services for the ERC conference. We quickly noticed that the autonomous robots are also very interesting for artists. Although ERC is a technology-focused event, the Ars Electronica Festival is an art & science festival, and many artists are already using modern technologies. As both events took place at the same time, we decided to use the possibilities offered by 8K streaming to familiarize participants with the subject of Mars rovers – says Maciej Głowiak, head of the New Media Department at PSNC.

Thanks to live streaming, as well as the use of immersive technologies, the participants of Ars Electronica could feel as if they were watching the rovers being right next to them. The connection also made it possible to debate and conduct a series of questions and answers between participants in the Linz and Kielce events.

– The audience was extremely interested in the event and participants asked many questions during the live broadcast. They were mainly interested in the scientific and technical issue. The huge immersive projection in the Deep Space 8K installation was impressive, and the high resolution of the stream and sound quality gave the impression of being among rovers on Mars. Participants were interested in 8K streaming and how it doesn’t lose quality. Such technical solutions could be the future for artists, especially those who want to work in movie production – said Roland Haring form the Ars Electronica Festival.

To make a transmission from Kielce, Poland to Linz in Austria, Sony F65 camera adapted by the manufacturer was used for 8K recording and transmission. The camera was connected to Sony BPU-8000 processor, which further transmitted live signal with using 16 3G-SDI connections. The signal was then processed by a own converter equipped with 2 BlackMagic DeckLink 8K cards to 4 12G-SDI connections. The server was developed by PSNC and additionally had the task of converting SQD signals to 2SI as well as embedding the 6-channel audio in 5.1 format. The audio was recorded using 6 microphones and mixed using a Yamaha QL1 mixer, then converted to DANTE and embedded into the additional SDI stream.

Properly prepared by the converter, the signals were then encoded into HEVC on a server provided by SpinDigital, on which the SpinEncLive software was running. This time a weaker hardware configuration based on four Intel Xeon Platinum 8176 CPUs (112 cores in total) was used, with the additional purpose of also changing the video frame rate to 29.97 fps. The encoder therefore produced an HEVC stream with a bitrate of 100Mbps, which was then encapsulated into the RTP protocol and sent via the Zixi Broadcaster over the traditional Internet to Linz. There, at the festival venue of Ars Electronica, the stream was received by a PC equipped with SpinDigital SpinPlayer and displayed in the Deep Space 8K installation on a 16-meter 8K screen allowing immersion.

– This was our first live 8K production outside the TV studio, which required us to move the entire production equipment from cameras to encoders to the rover competition space. Second, we did the live streaming over the public Internet, which makes the solution more affordable and easy to set-up, but has challenges regarding reliability and latency. Finally, we presented the content at the large-screen environment of the Deep Space, where the audience sits very close to the 8K screen, this means that we have to guarantee a very high quality of the 8K encoded signal to avoid any visible quality degradation – said dr Mauricio Alvarez-Mesa, CEO at Spin Digital Video Technologies GmbH, responsible for the image encoding part during the broadcast.

In addition, the audience had the opportunity to interact and ask questions during the presentation, which was done through an additionally established feedback channel via the eduMeet system, developed at PSNC.

– By combining ultra high resolution in 8K with low-delay transmission we are able to create an immersive live experience where people from the audience can interact and participate with the presenting team at the event in Kielce – adds dr Alvarez-Mesa.

It should be noted that such a set-up enabled the streaming delay of 1 sec. and transmission of high-quality signal over a distance of about 2000 km without any impact on a quality and without significant packet loss (the physical distance between Kielce and Linz is about 730 km, but the distance of fiber optic connections was much greater).

– We will continue working on research, development, and prototyping of 8K live immersive experience in order to extend its possibilities – says CEO Spin Digital.

Art and science in one place

The connection between ERC and Ars Electronica Festival gave the possibility of synergy of the world of science, art and new technologies.

– Such activities also perfectly fit into the STARTS initiative promoted by the European Commission, in which artists actively cooperate with engineers in the development of innovations and new applications. We hope that in the future our activities will bring results in the form of new projects combining technology and art – adds Maciej Głowiak.

Space and life on Mars are an inspiration for filmmakers, writers and computer game producers. Also this time – the almost tangible – opportunity to learn about human activities in the galaxy has become an inspiration for an international group of artists. It would not be possible without advanced technologies enabling live connection and transmission of high-definition image and sound.

The possibility of streaming is the result of the Immersify project in the Horizon 2020 program, which was implemented by streaming partners in 2017-2020.

– Thanks to the synergy of these two events, we wanted to show artists that the cosmic transformation is getting closer, but also that artists are needed in these changes. Art makes you sensitive to certain things. Note that commercial space flights have become commonplace, although no one believed it before. Today, even spaceships (that before resembled boxes) are designed to be visually friendly to the average person wishing to take advantage of space tourism. With people who are sensitive to aesthetics scientists planned to build space gardens on the Moon. There is even a plan to make orbital missions for artists, who will be able to paint the world from space – explains Łukasz Wilczyński, the originator and co-organizer of the European Rover Challenge.

He also adds that the further development of the space sector is impossible without humanists, and that with their artistic sensitivity are the driving force for development and changes, as in many other areas. That is why the cooperation of the world of science and art is so important.
– Art is an expression of civilization development. Artists are indispensable to disseminate knowledge about the cosmos, which is, after all, very inspiring. So there is no human development without art. We are aware of that and it seems that young people too, because during our presentation participants asked very insightful questions. You can see that the knowledge about space and space technologies that we use every day is shaping a new generation. Now the task of not only scientists, but also artists is to popularize the latest discoveries in this field – he adds.