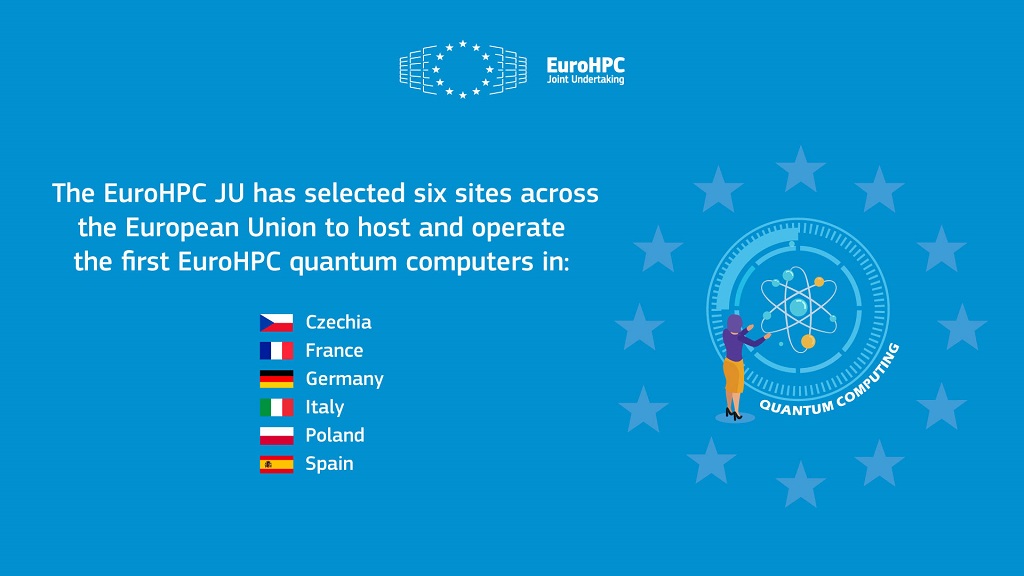 European High Performance Computing Joint Undertaking – EuroHPC JU seated in Luxemburg has selected six sites across the European Union to host the first EuroHPC quantum computers in Czechia, Germany, Spain, France, Italy and Poland. The objective of EuroQCS (European Quantum Computing and Simulation), total investment of over €100 million, is to deploy quantum computers in the hosting states and integrate them with the existing supercomputers.

The new systems based on European technology will be available for R&D purpose to a wide range of European users, the scientific communities, industry and the public sector. The selected proposals ensure a diversity in the quantum technologies and architectures to give European users an opportunity to test several different practical implementations of quantum computing systems connected with classical supercomputers and provided by dark fibers owned by PIONIER – Polish Optical Internet  connected to GEANT Network.

Poznań Supercomputing and Networking Center (PSNC) affiliated to the Institute of Bioorganic Chemistry, Polish Academy of Sciences (PAS) in Poznań, is the coordinator and initiator of the Polish project as well as the installation site. The project consortium also includes the Center for Theoretical Physics PAS and a Polish company: Creotech Instruments S.A.

– The major factor that determined our decision to apply in the EuroQCS call was the fact that we would be able to install a quantum computer whose key components are provided by a Polish company: Creotech Instruments S.A. Our talks with dedicated radio astronomers and physicists resulted in a quick and unanimous decision that Poland has a chance to take an active position on the quantum map of Europe – explains Cezary Mazurek, PhD Eng., Director of PSNC.

The leading Polish provider of specialized electronics for the quantum market, Creotech Instruments has been selected as one of the organizations to develop a quantum computer in Poland. Parallel to this project, the Creotech team also is currently involved in the development of the first large quantum computer for the European Commission. The implementation of this project is proceeding according to plan. A few days ago, the company concluded a 4-year framework agreement with the European Commission giving it access to financing tools to achieve the latter project’s goals.

– I am proud to see that once again the expertise of our Creotech experts has been recognized by the international community, setting us apart from other companies from the domestic Deep Tech market. Our team will be tasked with delivering specialized control and measurement electronics in the infrastructure of the Polish quantum computer integrated with the infrastructure of the PSNC supercomputer located in Poznań, Poland. There are many important computing tasks that classical supercomputers have been struggling with for years in scientific communities. Quantum computers, including those developed as part of the current project, will address this very issue. The infrastructure’s deployment in Poland will translate into the long-term industrial, scientific and even social development of our country, says Grzegorz Brona, PhD, President of the Management Board of Creotech Instruments S.A.

The key partner in the project is the Center for Theoretical Physics which brings together researchers from various fields that are essential for the development and application of quantum computations, including experts in theoretical physics, astrophysics and natural sciences: classical and quantum field theory, quantum optics, basics of quantum mechanics and quantum information theory. Quantum technologies are also a significant area of R&D works performed by the University of Latvia which boasts several highly ranked research groups in quantum physics. International expert teams in collaboration with PSNC will be responsible for developing hybrid classical-quantum algorithms and mechanisms to allow users throughout Europe to access and use the resources of the new quantum computer.

Quantum computations leveraging the support of PSNC’s supercomputing infrastructure and HPC technology will facilitate a range of scientific research and open up new opportunities for industrial innovation. It is worth noting that the selection of the six European sites to host a quantum computer coincided with the announcement of the winners of this year’s Nobel Prize in Physics, Alain Aspect, John F. Clauser and Anton Zeilinger for their work in quantum mechanics and quantum information science.

– Choosing Poland and our center as one of the six European locations for this breakthrough classical-quantum supercomputer architecture shows that we have met all the entry criteria and have the relevant experience to build such a hybrid. For many years, PSNC has been Poland’s representative in the PRACE (Partnership in Advanced Computing in Europe) initiative and has been implementing strategic projects from the Polish Roadmap for Research Infrastructures, including the PRACE-LAB and PRACE-LAB2 national supercomputing systems. We are very pleased to have managed to not only build a strong project consortium in partnership with the Polish scientific community and our business partner, Creotech Instruments, but also to involve experts specializing in quantum technologies from the Central and Eastern Europe region, including Latvia, Lithuania, Slovenia, Hungary and Austria, says Krzysztof Kurowski, PhD Eng. from PSNC.

It is also important to mention that another project submitted as part of the EuroHPC call to develop a quantum computer LUMI-Q in Czechia features other two Polish entities: Academic Computer Centre Cyfronet AGH and Nicolaus Copernicus Astronomical Center PAS, making it a total of five Polish institutions engaged in EuroQCS.

At the moment, the realization and financing plans regarding all six projects are being formally discussed. A total of 17 UE states will contribute to the quantum initiative.